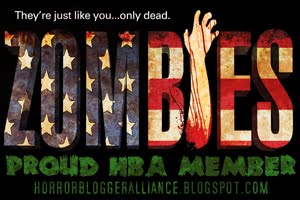 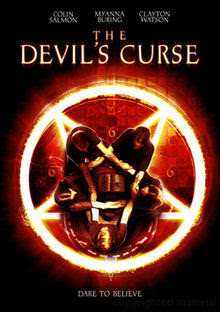 Now this is how it's done right, folks. Toni Harman's low-budget supernatural thriller Credo, released in the US as The Devil's Curse, hits home. I watched this flick after watching Seance and was amazed at the contrast between 'em despite many similarities. Filmed on what I assume are comparable budgets with faintly similar plots, Credo is decidedly the better of the two.

Alice (the gorgeous MyAnna Buring) and her friends find themselves homeless after Jock's (Clayton Watson) last party finally irritates the landlord to the point of eviction. With a final exam looming, Alice is desperate enough to accept Jock's offer to house them all for the weekend at an abandoned seminary courtesy of a security guard friend. With tech-geek Scott (Mark Joseph), party girl Jazz (Rhea Bailey) and forlorn Timmy (Nathalie Pownall) in tow, the group settles in to the decrepit digs. Unfortunately for them, this is a home with a past. Specifically, several previous tenants committed suicide after slapdash demon summoning ritual.


I know, sounds uninspired right? Not in the least! Alex Wakeford's script is tight, with characters having depth. The underlying religious subtext adds to the story without beating you over the head. Toni Harman's direction is fast with nary a wasted moment of storytelling. The cast can act and draw the viewer in. The location is subtly unnerving (members of the cast and crew actually thought it haunted) and has a grimy feel that is a bit eerie. Gore is restrained without losing impact.


So, anything fail with Credo? One minor quibble concerns the character of Jock, the lone American among British friends. Clayton Watson plays Jock as a "typical" oversexed Yank with no apparent payoff. I have to wonder if Alex Wakeford wrote Jock as a minor snub as there was no point to his nationality. Oh well, if Watson wants to play American characters he should spend a bit more time with an speech coach.


So, the Toolshed likes Credo and is looking forward to Toni Harman's next horror outing.

Toolshed rating: 8 of 10 dilapidated seminaries
Scrawled by Andy at 4:28 PM No comments: 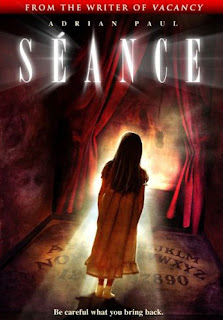 Okay, the Toolshed is back. No big whoop. Just got the fever again. Who knows how long it will last this time? A few changes are in order; the Toolshed is gonna slack off on the fiction department as I just don't have the time to read and compose a review for a three or four hundred page novel. Good or bad, most fiction deserves at least two thorough readings before I can comment and I just can't hack that. That is not to say that I won't recommend a title occasionally that I've read. I'm just not going to specifically read a book for review, mkay?

Anywho, a friend asked my opinion of Seance (2006) and I figured why not put it out on Teh Interwebz for the loyal minions of the Toolshed. First, the synopsis:

Lauren (Kandis Erikson) has a little ghost problem. Literally. She has nightmare about a little girl (Bridget Shergalis) haunting her dorm room. So, over the course of a holiday weekend, she and a few friends (Tori White, Chauntal Lewis, Joel Geist and A.J. Lamas) decide to hold a seance to find out what the li'l spectre wants. Unfortunately, the group raise more than just the little girl; they also summon the little girl's murderer(Adrian Paul). Now trapped in the almost empty dorm, can they dispel the decidedly evil force they've brought forth?

Well, let's break it down Spaghetti Western style with the good, the bad and the ugly, shall we?

The good: Hey, college students played by age appropriate actors? That's pretty cool to see. I don't know what the budget for Seance was (somewhere south of six digits. Way south.) but the acting wasn't too terrible. Not much here for skin hounds but the Krazy Kampus Krew are attractive enough.

The bad: The musical score. A certain childhood tune repeated ad nauseum ( isn't public domain wonderful?). The makeup effects were a little too amateur even for such a low budget flick.

The ugly: The script by writer/director Mark L. Smith was exceptionally formulaic. Even a casual viewer of the genre knows the same old plot beats are coming before the end of Act 1. The dialogue sounded fairly forced and character development is pretty much nil. The movie ends before the viewer finds much interest invested in anyone on screen. Plot holes big enough to drive a truck through. However all this pales before the worst of Seance's failings.

It just isn't scary. No tension is generated at all in the 90 minutes of screen time. Seance is boring. And boring just don't cut it.

Toolshed rating: 2 out of 10 spooky candles.
Scrawled by Andy at 4:55 PM No comments:

Man, do I love me some H.P. Lovecraft. And I also dig custom propmakers and the extremely cool stuff talented amateurs create. So I was delighted to find Propnomicon Can't say that I know much about the blogger in question, but I am highly impressed with his creations and the things he has dredged up from teh interwebz. If you're a big fan of cosmic horror, creepy props or esoteric things MAN WAS NOT MEANT TO KNOW, check it out.
Scrawled by Andy at 8:03 PM No comments:

Nicholas Close is a haunted man. Haunted by the very visual ghosts of the victims of violent deaths. Haunted by the sudden loss of his young wife and the possibility that he may have inadvertantly caused it. Haunted by the murder of his best friend as a child and the idea that he was meant to die instead.

Nicholas is the protagonist of Stephen M. Irwin's first novel, The Dead Path. Following the death of his wife, Nicholas quits his job and flees London to the small town in Australia where he grew up. But Nicholas is not just running from a life suddenly shattered by tragedy; he has also begun to see terrifying visions of people dying in bloody violent ways. He hopes to reunite with his estranged family and begin a new life, burying unhappy memories and nightmarish visions alike.

But very quickly events and disquieting feelings overtake Nicholas, forcing him to confront the unholy force he senses in a dark and forlorn grove of woods near his childhood home. As clues and circumstances arise, Nicholas realizes the malavoent darkness of the woods is more powerful, more evil and more ancient than he can believe.

I really enjoyed The Dead Path. For a first novel, Mr. Irwin has crafted an eerie tale that the accomplished masters of the genre would be proud of. His characters resonate beautifully and the reader can't help but be drawn into the novel. The complex relationship between Nicholas' mother and her children, in particular, was very artfully contstructed.

Mr. Irwin admirably uses the language to depict his scenes and action. I was often charmed by the similes he uses. Spare and poetic, I think Mr. Irwin's style reminds me very much of Peter Straub. His themes, character construction and tone, however, reminded me very much of Stephen King.

And therein lies my only qualm with The Dead Path. Genre readers will find no new ground broken in the novel. I feel that I must point out that I was (perhaps unfairly) reminded of King's It by The Dead Path. However similar the stories may be, The Dead Path is definitely not It relocated to Australia. It is rather a genuinely creepy story with a kindred leitmotif. I liked King's It very much. I was gripped by The Dead Path just as well.

In sum, if The Dead Path is the caliber of novels I can expect from Mr. Irwin, then I look forward to his next as soon as published.

The Dead Path was previously published in the UK and Australia as The Darkening. It is now available in the US from Doubleday.

Congratulations to the winner of our Cinema Fave Gush contest: iZombie aka Jeremy from Born Again Zombie! Jeremy will recieve a copy of The Dead Path by Stephen M. Irwin courtesy of Random House Publishing.

Still in the midst of reading The Dead Path myself but a review is on the way. If you'd like to read an excerpt see yesterday's post.

Thanks again, everyone for entering. This has been a lot of fun for me and hopefully we'll have another one soon. Congrats again Jeremy!
Scrawled by Andy at 5:34 PM 1 comment:

Excerpt from "The Dead Path"

Our innaugural contest is moving right along but we still have two days left to enter, folks! On Thursday, 28 October around 6:00 pm Central, I'll announce the winner. Please remember to leave your email so I can get in touch with you if you win. Good luck!

By the by, I recieved my reviewer's copy of "The Dead Path" and will be posting my review soon. If you'd like to read an excerpt, you can find it at Stephen Irwin's Facebook page. Here's a
link guys.
Scrawled by Andy at 3:56 PM No comments:

This is it, fiendish folks! Our first Toolshed giveaway! I have (courtesy of Random House Publishing) one copy of The Dead Path by Stephen M. Irwin free to the winner of The Toolshed's Cinema Fave Gush contest.

I have not, as of yet, recieved a reviewers copy but the publicist's info sheet describes The Dead Path thusly:

"Nicholas Close has always had an uncanny intuition, but after the death of his wife he becomes haunted, literally, by ghosts doomed to repeat their final violent moments in a chilling and endless loop. Torn by guilt and fearing for his sanity, Nicholas returns to his childhood home and is soon entangled in a dis turbing series of disappearances and murders—both as a suspect and as the next victim of the malignant evil lurking in the heart of the woods."


Simply put, send me a comment on this post and tell me in 30 words or less your favorite horror flick and why you love it. On October 27th I'll put all entrants names in my Mystery Murder bag and the lovely Mrs. Toolshed will pull a winner forth!

Winner will be announced on October 29th on The Toolshed. Good luck to all!
Scrawled by Andy at 9:17 PM 8 comments: